Dommes show off their muddy shoes

All articles tagged with "Cruel"

When her slave erred, this mistress did not get mad. She just punished him and she did it using her muddy shoes. She got him to lick her sneakers which had mud on them and she only let him go after they were clean. The mistress told him it was up to him if he would face the same punishment again. He did not want such a punishment so he became careful in everything he did.

Madame Marissa does not like mean people. And when she came across one today, she chose to make him do things her way. The mistress felt that the best way to change him and make him stop being mean was to associate meanness with pain and humiliation. So the mistress forced the mean guy to lick her muddy boots and she stomped him to make sure he felt the pain and the humiliation.

Mistress Natasha was shocked that her slave had disobeyed a direct order and she knew she was not going to let him get away with that behavior as he would never listen to anything she told him. So the mistress got him to lick her muddy shoes as punishment for his disobedience and he had to learn his lesson the hard and he never disobeyed her as he knew what would happen.

Madame Marissa's car broke down while she was on the road and she phoned a mechanic to go and check it out for her and repair it. She watched as he did his thing but he did not seem to finish and time was going by pretty fast. She was getting late wherever she was going and she had to make him hurry up so she hand trampled him using her boots to make him work faster.

Lady B is a merciless mistress and she does not mind being that way. That is what she did to this loser today as she used her boots to step on mud and then dominate him with the same muddy boots. She trampled and stomped on him all over his body and she not only made him feel pain, but he was also dirty all over his body. He knew better than to piss her off again.

Mistress Natasha wanted a slave who had good licking skills. So she tested him using her boots. She had them muddy and she asked him to lick them the way they were. He was shocked at the request but he knew it was not a request but rather an order which he had to fulfill. He licked them until they shone and that is when she let him go and pondered whether to let him lick her pussy because he was good at it.

Mistress uses muddy shoes to get even

When this guy pissed off this mistress, she promised to get back at him and have revenge which was worse than what he had done to her. She used her muddy shoes to torture and to humiliate him. He learned that she was not messing around and he had to lick the mud off her shoes in order to avoid being tortured in a worse manner that the mistress had promised. 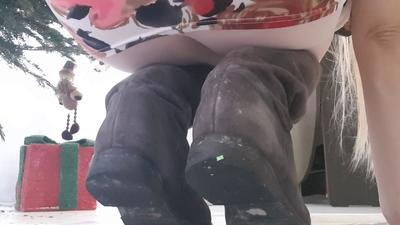 Mistress Gaia wanted to put this guy's licking skills to the test and that is what she did. The mistress got him to lick her muddy shoes so that she could get an idea of how well he would do it if she happened to give him her pussy to lick. She then rated his skills and found out he was not as bad as she had feared he would be.

Lady B uses muddy shoes to send a message

Lady B loves to send coded messages and today she did it using her muddy shoes. The mistress felt that it was important to trample him and also have him lick her shoes so that he feared her and that he also learned that she was not going to let him do whatever he wanted if she did not like it. After that punishment, they never had an issue as he knew what she was capable of.

Mistress Natasha wanted to degrade her new slave and she did it using her muddy boots. The mistress enjoyed how degraded he was at what she did and she laughed at him as he tried to beg for her to stop. She did not stop as she had a reason for doing all that and she had to achieve her goal. The slave learned never to take anything for granted.